Finally it’s over . . . the only complete solar eclipse in North America over the last 99 years.  So where were you when  it happened?

If you were like the few million of us who watched the eclipse from the “band of totality,” you were no doubt in awe of how celestial fireworks can alter your perception about life on earth, history, and human relationships.

For one magical afternoon, most people forgot about Donald Trump, confederate statues, and Russian hacking to look up (hopefully with the right glasses!) and see a sight very few humans have seen before – the blocking out of the sun by a hit-and-run moon.

Soma and I decided at the last minute to drive up I-85 from Atlanta to visit a friend in Lavonia, GA, in the totality area near Lake Hartwell.  We were planning to stay home since the glasses I ordered were late and had not yet arrived in the mail.

We left to drive up anyway.

Once there, we paid our $5 to get into Tugaloo State Park and got our glasses for free.  Then we sat near the lake with dozens of others whose sole connection was to witness this event.

I was so glad we went. 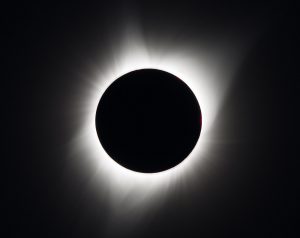 Those 2 minutes of totality – and being able to see the sun’s corona during the day – was something I had often dreamed of as a kid when the night sky and telescope were my constant companions.

I discovered that the eclipse often brings out hidden agendas and true feelings in people.  Depending on their outlook on life, many saw it as either magical, not-so-magical, or downright boring, especially if they weren’t able to see the full eclipse.

One mother thought it would be nice thing to see, but wanted to reschedule it via Twitter… 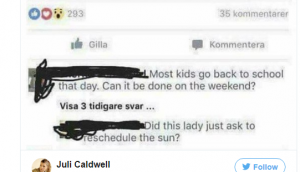 It takes all kinds, I suppose.