The Blob (1958) was Steve McQueen’s first movie.  A meteorite crashes near a rural Pennsylvania town, disgorging a big, black, gooey mass of stuff they called “the blob” that oozes out of its ship and starts spreading far and wide. 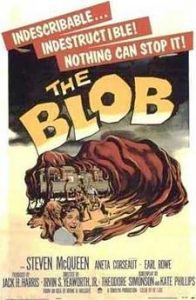 The Blob begins to envelop and consume anything it encounters, becoming larger and larger, until it threatens to take over the whole community.

Consider the reach of outlets like 24/7 News, Twitter (think Donald), Facebook and Netflix.  These four alone could easily take up 90% of your day or more.  When you add the billion of lesser-known social and media outlets, you have little time to accomplish anything else!

Many people simply get around this little time inconvenience by incorporating media into their business or job.  A couple of my friends are “YouTube placement consultants” who stayed glued to that media all day, every day.

If you’re like me and my wife, you spend a considerable amount of time surfing the movies on Amazon, Netflix and more. Yesterday we also watched several hours of YouTube videos… because we just just bought a Sony DVD player with online WiFi capability.  Now we can!!

And we’re senior citizens; we should actually know better.  Most younger folks have grown up with the “media blob” and are glued to their phones all day, and half the night.  I recently saw a young couple at a restaurant silently TEXTING one another, speaking only to verify the other one got their text . . .

But I’m through talking about this now, since I’m starting to sound like the old man next door shouting “Get off my grass!!”

The symptoms of modern brain warp has to do with the language centers of the brain, i.e., they stop developing.  Instead of using full sentences, you begin to lapse into the world of emoticons and “thumbwords.”

If you’re (i.e., ur) one of the fortunate few who don’t understand the message above, there’s still hope for you.  Otherwise, you – like me – are too far gone…

The cure for brain warp is simple, but not easy.  Stop doing the same old crap over and over again and get a life.

Seal your TV/DVD remotes in a plastic bag, submerge them in a plastic container of water, then put the container in the freezer.  Then unplug the cell phone, TV and other interruptions and go outside.

Got it?  That’s great.  Now you’re living in the 1950’s.  Go to the fence and share some gossip with the neighbors….  what? They’re too busy on their phones?  Too bad.

Well, there’s always movies.  Go ahead.  Thaw out the remote and watch Castaway, Wild, Into The Wild, The Way Back, or Kon-Tiki.  Then pretend you’re along the journeys with ’em.

That’s about as close as I‘ve been able to get to really “roughing it” these days.  Maybe you can do better.

If not, there’s always The Blob…

To your ultimate liberation,